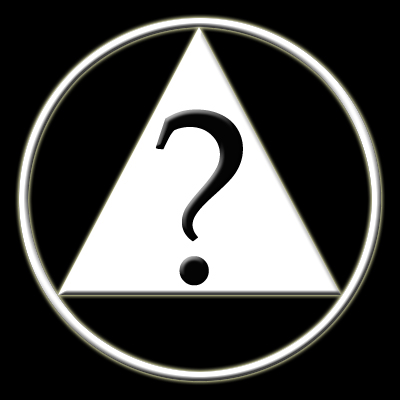 For reasons that will become obvious, this is an edited version of an 1800-word Morning Pages journal entry. It is not a complete discussion of the main topic, merely an introduction.

Dinner conversation was very interesting. I was more observant of watching my thoughts and possible responses. I withheld response by choice, not just an automatic childhood pattern. My motives and intentions are different even though the outward behavior appears similar.

By not wearing my glasses my mind/body system is shifting. Like the blind person whose other senses are heightened, I observe similar responses in my system. At first it surprises me, but then I realize it’s all one system and when I change something in one area it affects the whole system.

I observed my thoughts as I listened and didn’t debate my mental positions, opinions or beliefs. Even when the discussion turned to the cause of alcoholism, I mostly remained silent. That was the biggest surprise! I had no need to debate or defend a mental position. The beliefs expressed were varied. I listened with interest, but didn’t buy into the beliefs. If I were to say anything it would be from personal experience, because all else would be theory from others belief systems. Most of us have been brainwashed around that topic.

We all do the best we can to make up stories and beliefs to help us understand our world and survive in it. I have done the same. The cool thing is that I now have skills that allow me to take control of my stories and my beliefs and change them.

When I was operating from the 12-step belief system, there were many times I tried to leave it. I just read one of those in my 2001 journal the other night. But I had no place to go where I felt like I fit in. Then someone would call for help and the only thing I knew to say was go to a meeting. I didn’t feel right telling them to do that if I wasn’t doing it, so back I went.

People in the 12-step rooms share their struggles, stories and solutions openly. We quit hiding stuff because others are telling their secrets, too. We discover we are human and I could relate. Maybe the emotions were more bothersome to us and so we needed a coping skill. Before AA, Alcohol was my best escape, coping skill, or thing to blame my regrettable choices on. If I believe I am a victim of powerlessness over a disease then I don’t have to take responsibility for myself. There is some relief in that, but it still keeps me stuck in a victim consciousness.

I continue to practice Anita Moorjani’s approach to belief systems, don’t have them. There’s a challenge! At dinner when I said Alcoholism isn’t necessarily genetic, my response was to rise above it and look down on it as a whole. That sounds more like Anita’s higher view. I observed no need or desire to jump in and explain my mental position on the topic. I’m not even sure what I have said to any of them privately. It was an interesting discussion while I sat with an inch of wine left in a half-filled glass and wasn’t even sure if I would finish it. I could stop right there.

No matter what the causal theory is of a switch in the brain that doesn’t function and say, “I’ve had enough,” I healed myself with tapping. It released the cause for me and my problem with alcohol is gone. I can take it or leave it. Drink or not drink. I have the power of choice. The drink problem doesn’t exist for me any longer. Even The Big Book states that drinking was but a symptom or solution to our problem.

I admitted I didn’t drink the way most alcoholics do. The entry doors to that reality tunnel are wide, and the belief system in The Big Book allows anyone with uncertain tendencies to make the admission. There are no membership requirements other than a “desire not to drink.” I knew I had that and eventually I joined in with fellow members and uttered the words of conformity, “I’m an alcoholic.” That became one of the first I Am tags that I began to release, even before I became disabled in 2005. I changed it to, “I am a grateful member of AA.”

Yes I was grateful to be there for a lot of reasons. Many of them are friends I dearly love and my gratitude list for my days in AA is still beyond words. But am I an alcoholic? What does that mean? Is that the identity I want to create? Do I want to be stuck in that mindset for the rest of my life? I had one foot out the door but didn’t know where to go until my 10-year AA sponsor introduced me to meridian tapping. Much to my concern at the time, she had left the 12-step rooms years before, but she stayed sober and abstinent. What I personally demonstrate now is that I am sober even though I am not abstinent. In fact I am more emotionally sober than I’ve ever been my entire life, even before I had my first drink.

I didn’t go public with this until now, and here’s why. I felt a sense of responsibility, because I know the mindset of the people in the 12-step rooms I frequented. I was still reluctant to let go of some of it. They believe they are diseased and powerless. There are some who are still very miserable, hanging onto threads of sobriety and addicted to meetings like I once was. If they believe I released my alcoholism by tapping, they may not understand the process. They might try it ineffectively and use it as an excuse to drink. If it didn’t work for them the way they expected, they might go off on a bender, maybe even die.

Based on my personal experience, what I teach now is that each person is responsible for what they create in their mind/body. I am not responsible for what anyone else feels, thinks or does. I don’t have that kind of power. I am here to BE Grace, share my experience, strength and hope holistically with the world. I can no longer keep my light under a shroud of silent darkness. If someone reads this or hears me and misunderstands, or creates a different belief about it in their head, I am powerless over that. It is their responsibility.

Over a year ago, I explained to someone who was close to me that I have also changed my mind about Alcoholism through my personal practice. I thought it would help them understand in case I decided to have a drink in their presence. About nine months later they said they had gone to Al-anon because of their issues with me. It may have been their indirect way to call me an Alcoholic who had “gone back out” (12-step lingo for drinking again after abstinence). It reveals more about them than me.

If they don’t use or understand my current belief system, it may be hard for others to understand how fast and much I have changed. They may need to make up stories within their current belief system to make sense of how they experience me now. If they try to blame me for how they feel I may respond differently than in the past by being more outspoken and assertive. If they can’t see how tapping changed my behavior then they may think drinking is the cause. Maybe they used it as a justification for an angry explosion with perceived encouragement of others including a psychologist who has only heard their stories.

Whatever people think, those are the stories they make up based on their perceptions, experiences and beliefs. Their stories may include what they think I was like when I drank before joining 12-step fellowships. They didn’t see me drunk and rarely saw me drinking. All they know is what I said during the years I confessed to be an alcoholic. Whatever judgments and beliefs they have about what an alcoholic is or acts like is what they think I was like, again stories they made up. Some of those who saw me drink first-hand have told me now that they never really believed I was an alcoholic.

In my latter 12-step years I watched from a distance how someone I used to be close to and believed was alcoholic can now successfully moderate their drinking. I read in The Grapevine (an AA periodical) how 60% of alcoholics who recover do it outside of AA. I can safely say that the way I practice my new beliefs and skills is another way to become and stay sober without abstinence. Deep breath—peace.

Wow! I didn’t expect that to flow out of my fingers this morning. Where I thought I was going was about more mental clarity (LOL) in other areas as a result of less visual clarity without glasses. There is more clarity to be seen in many areas of my holistic being.

This site uses Akismet to reduce spam. Learn how your comment data is processed.

Grace closed her coaching practice in 2016. The business website was shut down in 2018 and only the blog posts were migrated to this website. As Grace journeys forward in this life, there may be new posts to give the reader more insight and understanding as to why she left FasterEFT and what she is doing now.